Cultural expeditions through it offer you essential information about city’s history and fascinating stories from the last 500 years.
Let’s find out about its most spectacular buildings and aristocratic families that owned them !

At the beginning of the 20th century Bucharest was a garden-city with avenues.
Then, the city was known as the Paris of the East.
Why ? Because of its affection for everything French, from architecture to food to fashion.
Imagine beautifully adorned carriages riding along Little Paris avenues…
Gentlemen in top hats and ladies in elegant gowns strolling on the streets with oriental flavors…

One of the BEST WALKS you can have in Little Paris

Victory Avenue is one of Bucharest's oldest and most famous avenues.

Its history goes back to Prince Constantin Brancoveanu’s time.
Then it connected Mogosoaia Palace and Prince’s Palace from Bucharest’s Old Court.
At that time it was paved with tree logs, hence the name of Mogosoaia’s Bridge, kept until a century ago.
Around 1920s this was the main promenade place for rich locals.
On weekends – especially on summer evenings – these used to take strolls here.
In the early 1940s, Marshal Antonescu succeeded for the first time to impose one way sense on Victory Avenue.
In the evening people went towards Kiseleff Road and in the morning towards Dambovita River.

Today, city’s main artery bordered by French-inspired Belle Époque buildings is a leading retail avenue.
Concentrating Bucharest’s major luxury brand stores, exquisite Victory Avenue is absolutely THE place to be for serious luxury shopping.
Enjoy your passions in this key destination for museums exploration and luxury brands in a carefree way.
And even open some closed doors not just for a sneak preview of a world famous designers’ studio !

Historical monument since 2004, Victoria Palace from Victory Square is one of Bucharest's emblems.

This important sightseeing is in top most beautiful palaces of Romania.
And its story makes locals proud even if it hosts the headquarter of a public institution.
Architect Duiliu Marcu  was student of Bucharest Superior School of Architecture (1906) and of Paris Ecole de Beaux-Arts (1912).
In 1937 he built Victoria Palace, a monolithic structure materializing an austere expression of Neoclassical style.
This had the main facade and lateral ones plated in Carrara marble tiles.
It also had sculpted decorative panels made of the same material on both sides.

Initially designed to be headquarters of Foreign Affairs Ministry, Victoria Palace served as headquarters of Foreign Ministry.
Following the heavy damages suffered during Second World War bombing in 1944, it underwent significant restoration works between 1944–1952.
The 2 side panels were removed, the main façade being rebuilt with travertine tiles.
During Communist period it housed the Council of Ministers hence the name of Council of Ministers Palace.
Renamed in Victoria Palace in 1990, it continued to be headquarters of the Government of Romania hosting Romania’s Prime Minister and his cabinet offices.

Through architect I.D. Berindei's design, 1900s' luxury and refinement gave shape to one of the most brilliant and impressive palaces in Bucharest.

Designed in Baroque style specific to Louis XVI, this belonged to Prince Gheorghe Grigore Cantacuzino.
Known as the Nabob, this was mayor of Bucharest, twice Prime Minister of Romania and also Chief of Conservatory Party.
Two stone lions guard the sumptuous main entrance.
A giant shell-shaped cover realized in the most authentic Art Nouveau style adorns it.
Krieger House in Paris made the inside decorations.
Former stables now host Bistro Athenaeum (with old times atmosphere).

Nabob’s son – Prince Mihail G. Cantacuzino – inherited the palace which after his premature death, in 1928, got to his wife, Princess Maria (Maruca) Cantacuzino.
Born Rosetti – Tescanu, Maruca was one of the most controversial women in Romania’s high aristocracy.
This was due to her capricious nature and love affairs.
In 1938 she married George Enescu, a good friend of Queen Marie of Romania.

Born in 1881 in Liveni village, Enescu made his American debut in 1923.
Then he conducted a concert given by Philadelphia Orchestra at Carnegie Hall in New York City.
Yehudi Menuhin had been his pupil for several years starting in 1927.
While staying in Bucharest, Enescu used to rent on long term an apartment with piano at Grivita Hotel.
Long worldwide tours ended with escapades for recreation at Luminis Villa he have built in “the pearl of Carpathians”.
There you can still see one of the pianos to which he composed numerous masterpieces.

After marriage, George Enescu lived for a while at Cantacuzino Palace.
As he preferred a simple life, the couple chose to actually live within smaller house behind palace.
This previously housed palace’s administrative staff while the palace served only for musical soirees and dandyish social events.
Always preferring more austere interiors, the composer furnished his working chambers with modesty and discretion.

Enescu’s most intimate retreat was the manor built in 1880 by Rosetti Tescanu great boyar family. There, a 250 years old elm still exists in the park

Maruca donated the buildings complex to Romanian state on the condition George Enescu Museum to function there permanently.
Thus, since 1956 this awaits music lovers to reveal part of the life of the great Romanian composer.
It displays fascinating items like musicians’ manuscripts (scores of his compositions), pictures, drawings, decorations…
Among the musical instruments you can even admire his first violin from the age of 4. 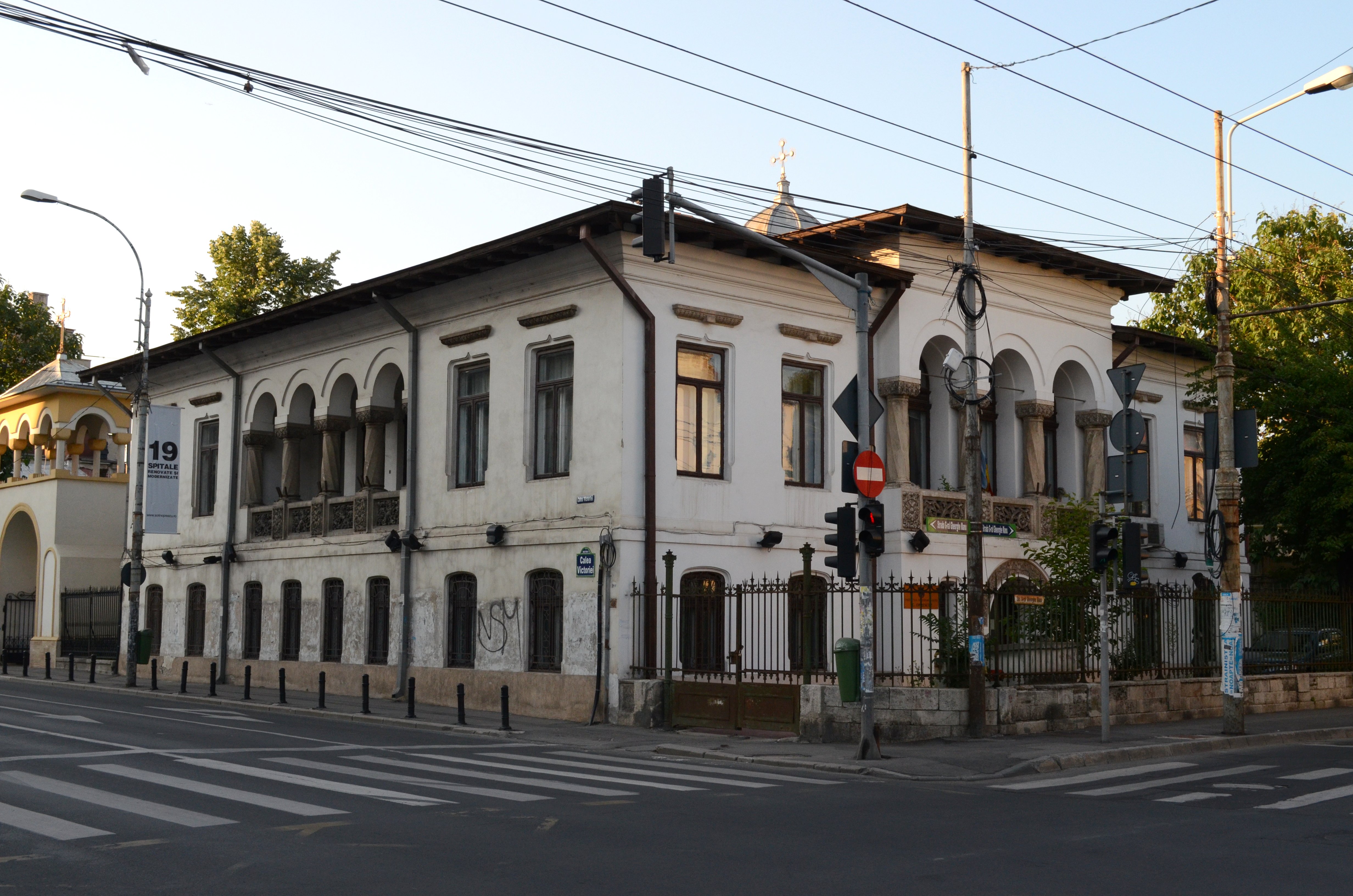 Opposite to Cantacuzino Palace there is another beautiful historical monument.

Around 1860, Lahovary family raised the building body from Victory Avenue bought in 1910 by brilliant lawyer Constantin Dissescu.
This graduated from the Faculty of Juridical Sciences of Paris (he made History too) as PhD student.
Professor at the University of Bucharest and Iasi (inclusively of Law), he wrote the first Romanian constitutional law book.
Member of National Liberal Party until 1885 when he moved to Conservatives, he returned to Liberals in 1923.
Deputy and Minister – inclusively of Justice for a short period of time – he helped draft the 1923 Romanian constitution.

Dissescu asked architect Grigore Cerchez and his French collaborator Alexandre Clavel to transform the building without modifying its structure.
So in 1912, these gave to Bucharest a new architectural jewelry considered a great example of New  Romanian style.
National architectural style, this was very popular in Bucharest at the end of 19th and beginning of 20th century.
It builds on traditional Brancoveanu-style developed during Constantin Brancoveanu’s reign (late 17th – early 18th century).
This blends local peasant architectural tradition with Byzantine and Ottoman elements.

Elegant Dissescu house distinguish through 2 interesting facades in Brancoveanu style, with arches supported by twisted columns and richly carved stone ornaments.
Frequent changes of destination altered its interior architecture that still preserves elements of the original decoration created by Grigore Cerchez.
Since 1967, it hosts George Oprescu Institute of Art History.
Oprescu founded the institute starting with his impressive library and a rich collection of pieces of furniture and paintings.

Its owner was Filip Lens, magistrate, grand treasurer and chancellor of Justice.
His was the child love of a French private secretary of a Prince’s descendant with a gipsy servant of a local nobleman.
Lens married the daughter of a nobleman with a fabulous fortune earned through fortunate speculations.

This is one of the most beautiful palaces of Bucharest and Victory Avenue.

A French architect built it in the second half of the 19th century for Gradisteanu couple.
They were from the old boyar Gradisteanu family related to entire Wallachian and Moldavian aristocracy between 16th-19th centuries.
The couple had no heirs, so the palace was left to Maria Gradisteanu, owner’s sister, married with Prince Ion Ghika.
Gradisteanu-Ghika House has extremely rich decorated Renaissance frontages, coffered painted ceilings, monumental stairs and stained windows.
Same as Emperor Trajan and King Carol I, this considered Danube river an atu and European civilization’s cradle.
So he dedicated the palace – also known as Danube House – to river’s Romanian history.

Immediately after marrying Maruca, composer George Enescu moved in an apartment behind Athenee Palace Hotel.
This was on the 5th floor of the building on today’s George Enescu Street at no. 7.

You can purchase most of Burberry collections from their first store in Romania.
Launched in 2012 this is the largest in South East Europe: 440 sqm and 1,000 m facade.

Take an inside tour of a culture symbol – Romanian Athenaeum

This is also the headquarter of George Enescu Philarmonic Orchestra.
It really worth to pay a visit inside and let your hand carress the Carrara marble.
Not to mention the fascinating story of the remarkable 70 m long fresco hidden for 20 years.
While attending a concert here you’ll be amazed by its exceptional accoustic and perfect visibility from any seat.
If an odd year come in September to enjoy the worlds’ greatest orchestras and soloists.

Number one on Romania’s best museums list has got to be the Fine Arts Museum hosted within Winter Palace.
Former residence of King Carol I of Romania this overlooks to University Library, found in top 100 most beautiful libraries in the world.

Open the gates of a patrimony palace with a fascinating history and unveil its secrets.

Raised around 1900 this discreet very modern building was endowed with heating installation, electricity and running water.
The imposing access stairs that witnessed receptions of great elegance leads you into a wonderful fairy tale world.
Sumptuous saloons with beautiful Renaissance details have walls covered with the fabulous art collection of Bucharest’s Pinacoteca.
This includes the heaviest names in Romanian painting – Grigorescu, Tonitza, Luchian, Pallady, Iser – together evaluated at EUR 5 mil.

Between 1938-1941 engineer Emil Prager built a U-shaped edifice after the design of architect Emil Nadejde.

Initially, this hosted the Ministers Council, then being the headquarters of Romanian Communist Party Central Committee.
In 1989 Nicolae Ceausescu the communist leader of Romania kept his last speech from the balcony above main entrance.
Booed off by the crowd gathered in front of the building, he tried to escape from the roof by a helicopter.
But misled by military Ceausescu couple never reached Otopeni airport.
After Revolution, the palace was the headquarters of Senate until this moved within Parliament Palace.
Nowadays it hosts the offices of Internal Affairs Ministry offices.

Americans built it between 1929-1934, on the former place of Otetelesanu Garden.

Inspired by Empire State Building, they raised it in the Art Deco style specific to American skyscrapers.
With its 53 m height was the first skyscraper in Bucharest and Romania until 1970s when InterContinental Hotel appeared.
The construction also recorded a premiere, being the first high-rise building with metal frame in Romania.
There was a project including skyscrapers on both sides all along Victory Avenue, but Second World War interrupted it.
Soon after inauguration, the offended telephonists gone on strike for 1 week.
This because they had been accused in the newspaper for making the connections after 10-15 minutes.

During World War Two, on August 26, 1944, German aviation executed a destruction mission of Phone Palace.
But the bomb missed the target and hit the National Theater, found across the street.
The earthquakes from 1940, 1977, 1986 and 1990 also affected the building.
So it was extensively restored for 10 years starting from 1995, according to the project of professor engineer Alexandru Cismigiu.
Nowadays it hosts Romtelecom headquarters.

This is the first hotel in Romania affiliated with Ramada American brand (1990s).

Built before WWI, the hotel had its first VIP guest in the summer of 1996: Hillary Clinton, then first lady of United States.
Turkish shareholders – now aged – controls Gloria Jean`s coffee shops chain too, but their children do not want to work within hotel business.

It was famous for its Marble Hall and having each room with different style.

See you all back here soon for more tips, picked expressly for you.
Meanwhile feel free to address me any question you might have about Romania.
And to share this with anyone who might find it useful or interesting 😉
Happy tours !