Nature lover’s dream is to hop on a plane and retreat in Carpathian Mountains’ wilderness.
Well, Azzurytt takes you off the beaten path to picturesque and hidden places that few travelers ever reach.
Layer upon layer of intense beauty awaits, and we’ll unveil it all.
Few journeys offer such an inspiring blend of adventure, beauty and elegance.

Despite the rain outside, under the large umbrella, the flavours of smoked sausages and forest fruits syrups tantalize your senses.

Bear, deer, and boar dry sausages, wild strawberry, raspberry, underbrush, fir buds and fir cones thick syrups, cheese in fir tree bark, smoked cheese, forest fruits sherbet, honey, blueberry brandy…
The driver is quite passionate about homemade drinks.
He prepares his own elder juice, so he asks about the quantities in the recipe of this amazing blueberry brandy.
The answer surprise and make us all laughing: as many ripe blueberries and some palinca (traditional local brandy), no sugar, no any other add-ons.
Honey is another local delicacy you don’t wish to miss.
Especially the one made of acacia.
Some says in Romania you find the most flavored and tasty one.
Maybe because of the unknown natural mix of fertile soil, clean air and weather conditions.

Check the castle’s well-preserved architecture, weaponry, armours, costumes, furniture and feudal art.
Once you get in the highest white rooms, admire Bran village of shepherds as young princesses used to do it !

Mysterious gloomy edifice with mock-Gothic towers, the famous fortified castle dates from 14th century.
This hides a labyrinth of winding corridors, narrow passages and secret staircases.
It controlled an international trade route and in the 20th century, Queen Marie of Romania – granddaughter of Queen Victoria – lived here.
One of the 10 most beautiful medieval castles in the world, this is also:
– the most expensive estate in Europe and
– the second most expensive one in the world (Beverly Hills’ property built in 1926  – setting of “Godfather” movie – is the world’s most expensive estate.)
Bram Stoker never came near Transylvania and it is uncertain if he knew anything about Bran Castle.
Castle’s park hosts an open-air ethnographic museum with traditional Romanian peasant cottages and barns full of themed souvenirs.

This medieval custom that brought the highest takings to Transylvania’s king, became between 1944-48 residence of Princess Ileana.

Imagine 60 acres of lush forest, rivulets and ponds located at the Carpathians' feet.

Can you believe these became probably the largest in Europe and the world’s best sanctuary for bears ?
It has lairs, naturally feed pool and special clinic.
For curious visitors, it features alleys between reservations as well as observation points in trees.
You can safely move between these on high bridges.
European brown bears (protected specie) and an Asiatic black bear in-dwell here.
Dislodged from their natural environment, their return in the wilderness could harm them.

Saxons revolted against King Charles Robert of Anjou of Hungary found refuged here.
Located atop of the Cohalm Hill, this is one of the most beautiful citadels in Transylvania.
With 7 towers, guarded by thick strong walls, it offers to the traveler’s eye breathtaking views of green surroundings.
Historians believe they built the fortress on the old ruins of a very important Dacian settlement.
They also say last King of Dacians – Decebal – after long exhausting battles, cut his throat here.
This in order to not fall prisoner to the Romans led by Emperor Trajan.
In the 15th century the Turks conquered and robbed the fortress.
Two centuries later it was burned down.

Finally in the 18th century, following a strong storm that flew away the roofs, it was forever abandoned.
But now, despite its troubled past you feel so peaceful here. And the mountain air is so refreshing.
You can easily spend more than half day taking strolls along the stoned paths.
And trying to imagine how over 400 people lived within these walls.
Visit the cottages where the inhabitants of the villages around took refuge in during hard times.
Pass through the Middle Fortress Gate and look for the Military Storeroom…
The Servants, Pentagonal and Gate Towers or the Chapel and the Fountain are equally appealing !

One of the largest and best preserved fortresses in Romania and even in Europe is Fagaras Fortress.

Its name seems to mean “wood money”.
Local legends say that peasants who built received as payment money made of wood.
At the end of 12th century this wooden fortification had surrounding ditch and remblai.
But the conflagration from the middle of the 13th century destroyed it.
Reinforced in the next century, it became a stone fortification.
And another hundred years later it transformed into a defense military fortress.
By the 16th century it already was an unattackable medieval fortified castle.

Being the most imposing monument of the great land of Fagaras, this was also its political and administrative center.
But the apogee period of the fortress came only in the 17th century.
Then the imposing medieval ensemble became a fastuos Transylvanian princely residence.
The Italian architects brought by Prince Gabriel Bethlen imprinted the Renaissance aestethics to the construction.
Thus stucco, blazons, floral motives and loggias open in arches appeared.
The 4 bastions added at the fortress corners complemented the Italian style casemate look.

Prince Gheorghe Rackoczi I doubled the northern and southern exterior walls on the inside.
Filling the created spaces with soil they obtained an 8 m thick resistance.
They also enlarged, deepened and filled the defense ditch around the fortress with water from Olt River.
Thus they made it a real lake.
During the 1950s the fortress served as prison for communism opponents and dissidents.
Restored after the 1989 revolution, Fagaras fortress awaits you today with a museum and a library.
Let’s step inside and explore its Turnul Pestrit (Variegated Tower), Turnul Negru (Black Tower) and Salii Dietei (Diet Hall). 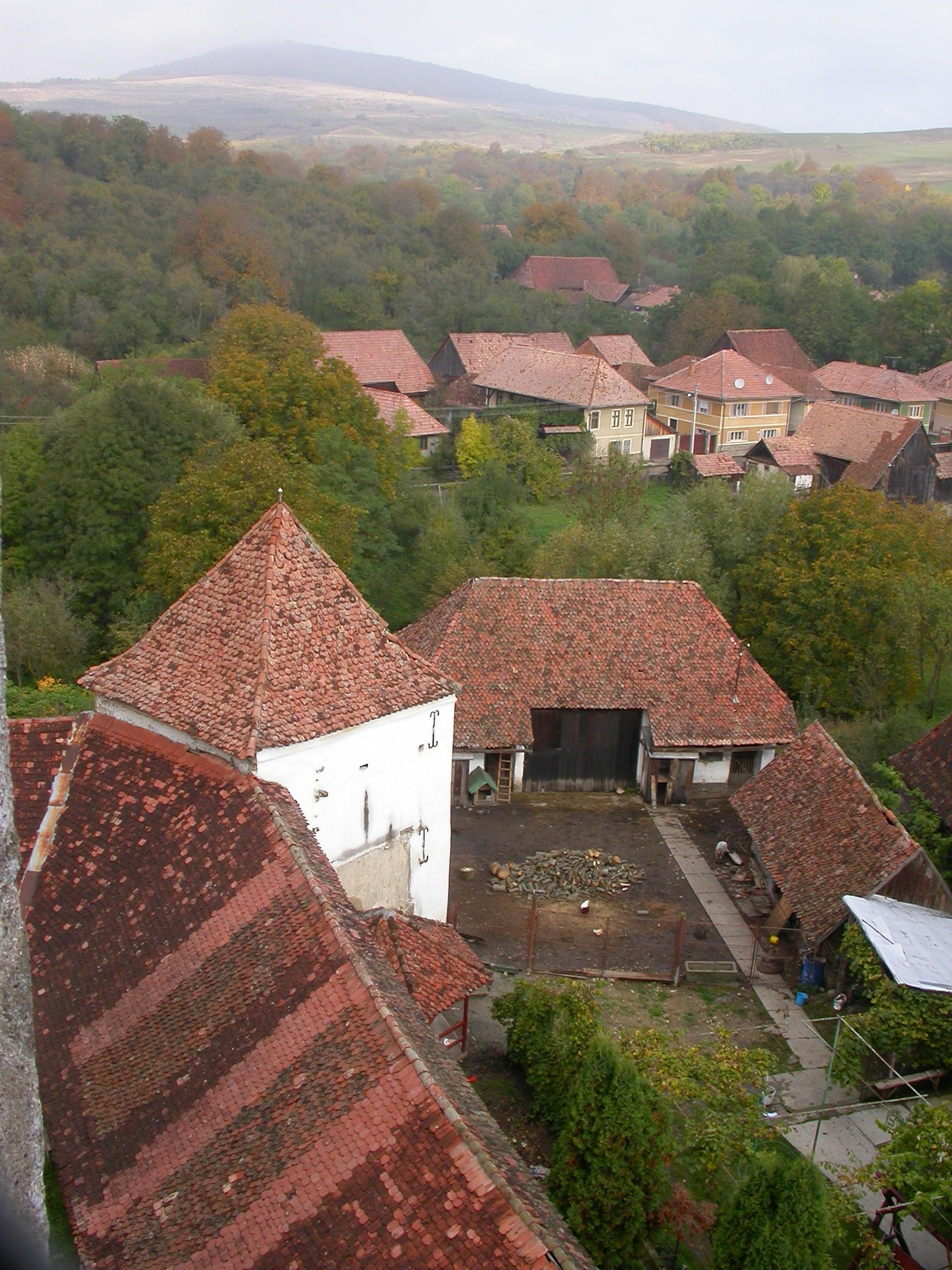 Then, Tatars invasion from 14th century put Darjiu village on documents for the first time.
Inhabitants were Szeklers, descendants of colonist who defended eastern borders of Hungarian kingdom since 11th century.
Even today over 90% of inhabitants are Hungarian.
After colonisation, Darjiu divided in free Szeklers and serfs (social structure kept until 19th century).
The free prosperous community had its own guilds and neighborhoods.

In 16th century a defense parapet floor pierced by shooting holes with reversed keyholes shape heightened the fortification.
Church configuration dates from the same century.
The important fortifying restoration made then in Gothic style gave it:
– ample windows,
– arcades in broken arches and
– consoles supporting network vaults’ stone ribs.
Also in 16th century Szeklers adopted Unitarianism, an official religion in Transylvania.
Symbols of it appear on the Baroque pulpit, eastern stand and organ dating from 18th and 19th century.