He launched the painter Adrian Ghenie on the international market at amazing rates.

Then the gallery owner Mihai Nicodim returned from Los Angeles in his natal city, Bucharest.
Here he opened an art gallery hosted within the sumptuous spaces from Enescu Museum‘s upper floor.
The gallery presented not only known or promising Romanian artists.
But also the international ones for whom a varnishing day in Bucharest is more picturesque than the overly traveled western locations.

One of the most beautiful gardens of Romania, Herastrau Park appeared in 1936 following the swamp area drainage between 1930-1935.

The largest city park in Europe – about 110 ha – surrounds the lake with same name.
This is Bucharest’s largest lake (74 ha).
Take a boat trip or try a ship cruise to see the island in the middle of it from close.
Then rent a bicycle to explore some of the park’s attractions: Japanese Garden, Roses Island, Flowers Exhibition, Modura Fountain, Aquarium.
Or simply take nice strolls on the myriad of alleys around the beautiful lake.
There are a lot of flowers, squirrels and plenty of bird species not to mention the entertainment options.
This is one of the places in the city where they organize lots of fairs and festivals.
In the evening select restaurants, most of them by the lake shore, wait to tempt and satisfy your wildest cravings.

Don’t you have time to visit the countryside but only have a few spare hours in Bucharest ?

Return in time in the mirific landscape of the park on Herastrau Lake’s shore.
You will be glad to find a real “village” with monuments and artifacts from 17th to 20th century.
The open air Village Museum is the fastest complete tour of villages from all Romania’s regions !
Over 2 fun filled hours, you will have the unique opportunity to span the entire country.
And see the best range of preserved rural peasant buildings in Romania.
And this without leaving the museum.

Displaying Romania’s bucolic history, Village Museum is a forested collection of more than 120 structures from all over the country:
– from traditional houses, households and churches,
– dug-out homes with vegetables growing on the roof,
– windmills from Danube Delta,
– to outbuildings, watermills and craft workshops…
Each represents a miniature museum with traditional items: towels, pots, oil press etc.
This extraordinary museum’s guided walking highlights the entire ethnographic and folkloric richness of Romanian people.
It is the perfect place to understand Romanian country life.

Famous sociologist Dimitrie Gusti founded the museum in 1936.
But the dismantling, transportation and reassembling of the representative buildings from important ethnographic areas started one year before.
Piece by piece, each stone and wooden structure was brought to the site.
This is one of Europe’s oldest outdoor museums and initially had only 33 buildings.
Now it is one of the largest establishments of this genre in Europe.
It is also:
– the most important Romanian and one of the most valuable ethnographic museums in the world,
– the second largest ethnographic outdoor museum (after the one in Stockholm) and
– among the most prestigious museums in Europe.

This is one of the reasons for which, at the beginning of the 20th century, Bucharest was called Little Paris.

It is impossible not to notice the monument dominating it.
It symbolizes Romanian pilots’ sacrifices during the First World War.
And the Role of Romanian aviation pioneers in the world, pursuing various goals: skill development, performance, adventure and fighting in World War I.

Constantin Brancoveanu, Prince of Wallachia, founded Bucharest Princely Academy at the end of the 17th century.

At that time lectures held here were in Greek.
Only in the second half of the 19th century, Prince Alexandru Ioan Cuza converted the Princely Academy into the University of Bucharest.
Neoclassic palace designed by a Romanian architect and decorated by Karl Storck, hosts one of the oldest leading  universities in South-East Europe.
Its degrees are recognized in most countries in the world and many of their graduates have become public figures.
Some are writers, professors and researchers in great universities around the world, members of Romanian Academy or academies abroad.
Others are politicians: Parliament members, ministers, prime-ministers, presidents, diplomats, etc.
One of the most important research centers in the country, this offers inclusively PhD and Erasmus programs constantly collaborating with over 100 prestigious universities from 40 countries.

Built in bossage, the ground floor has Doric pillars extending on the second floor too.
The 2 floors of the attic have decorated skylights.
The 1944 bombings destroyed the original central frontage of the palace.
Classical style relief  made of Rusciuc stone, this represented Minerva crowning the arts and sciences.
Domes cover the palace’s round corners plated in Doric columns. Initially, besides Faculties of Bucharest University, it also hosted Fine Arts School and Natural History and Antiquities Museum. During the First World War the University closed due to German occupation.

But it bloomed during the inter-war period when the teaching staff included some of the most prestigious Romanian intellectuals.
Carefully restructured in 1948 according to the Soviet model, the University had 8 faculties by 1960. Communist censoring regime prevented its international development.
But 30 years later, after its radical reorganization, the number of students, international contacts and co-operation projects considerably increased.
Thus, in 2010 it comprised 19 faculties, over 30,000 full-time students (of whom 1,000 foreign students) and 3,000 teaching positions.

They say the owners were twin brothers, this being the reason why its wings are symmetric, built in mirror.

At that time it boasted about the most modern sanitary installation in Europe. Considered a top quality hotel since its inauguration, it has retained both its beauty and special place among capital’s hotels.
This architectural landmark with strategic location in the heart of Bucharest has a rich history.
One of the many tumultuous events it has been through was the bombing during the Second World War.

Also called Podul Mogosoaiei Synagogue - as a reference to Victoriei Avenue nearby) - city’s oldest synagogue dates from the first half of the 19th century. 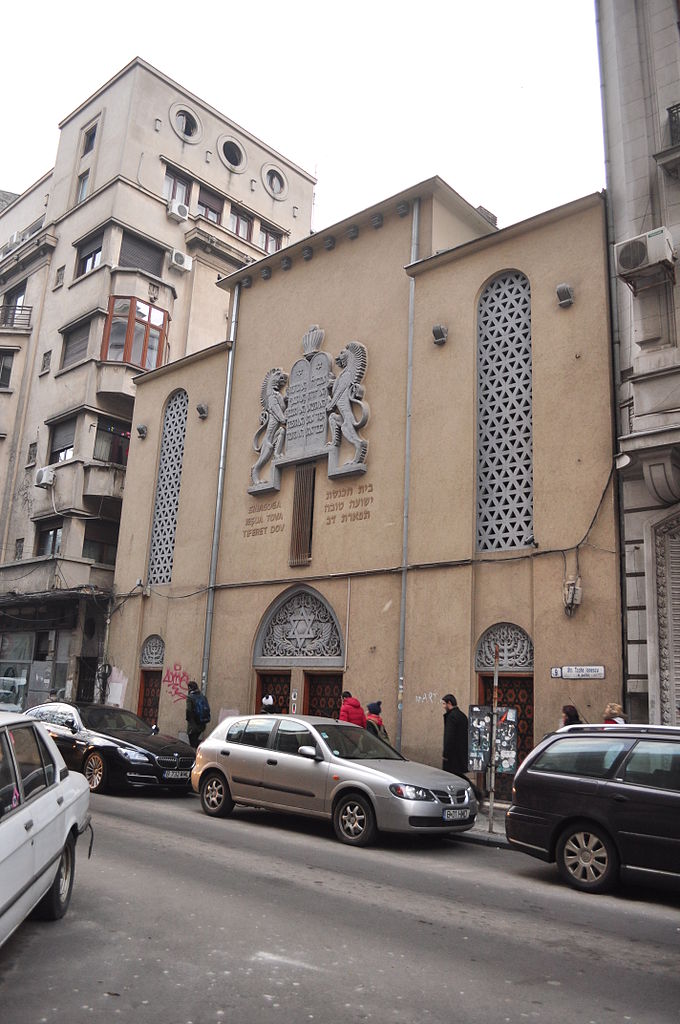 Built in Moorish style (Arabesque) it has a monumental triptic concept street facade with a relief depicting the Ten Commandments.
It can host 300 people, important guests being seated on thrones placed on Chivot’s sides.
After 2007 restoration, Rabbi Shlomo Amar uncovered a large plaque engraved with the names of those who led the synagogue since its founding.
It still serves the local Jewish community being open only during services.

Every year before Saint Nicholas, patron of kids and travelers, Bucharest put on a new unexpected coat of sparkling lights: multicolored globes, white icicles, blue, green and pink Christmas trees, golden angels…
Traveling in Bucharest during winter holidays is a real treat, with the city’s gorgeous architecture lit to celebrate the season, with shows, museums and restaurants…
Christmas trees and seasonal lights twinkles along avenues and through apartments’ windows.
Both you and your kids will adore the window displays and the night time sweeping views over snowy city.
Enjoy the most Christmas lights decorated capital in Europe in your own style !

This tours are completely tailor made to best fit all your own preferences.
Kindly contact us for pricing and availability.